This is a page for storing supplementary information about various people involved in comics. In particular, facts (with sources when possible) that might be relevant to folks researching credits to add to or correct in the GCD. This is also a good place to list corrections to Who's Who, since that site is no longer updated.

According to Gene Reed and Ramon Schenk, lettering credited to "A. Machine" in Charlton comics was produced using a modified typewriter that would accept original art in the carriage, mostly by Dick Giordano's wife but also by many other creators (and perhaps their wives). The lettering was typed onto the art, which explains why it doesn't always fit the word balloons as neatly as hand-lettering.

Used to be credited as "Jose Bea" before late 1970s."Josep" is the Catalan name for the Spanish "José" and was forbidden during Franco's dictatorship (1939-1975).He has always used "Josep" since then.

The following regarding Vince Colletta's collaborations with other artists was received from his son, Franklin Colletta, on January 1, 2013. "My dad was responsible for producing a lot of art from time to time. Coincidentally, many artists were looking for work. You would have to list about 25 guys to cover what was essentially the Colletta studios in the 50s, 60s and 70s. Many stories are credited to Vinnie alone when in fact there were other hands in the mix. I started using the 'Vince Colletta Studio' credit because I've seen his collaborative art referred to that way and out of fairness. There was no fixed arrangement, per se. Artists who had talent and could meet deadlines like Joe Sinnott, Dick Giordano, Hy Eisman and Maurice Whitman figured prominently while slower or less enthusiastic artists like Mike Sekowsky, Frank Giacoia, Matt Baker or Wally Wood appeared less frequently. The contributions by artists working under my father ranged from penciling and inking to backgrounds and breakdowns. Vinnie's own contributions to books I consider "Vince Colletta Studio" material ranged from drawing 99% of the stories to just retouching faces and other prominent features."

Capitalizes and spaces his name as Sam de la Rosa (per contact through the GCD Error Tracker).

The credit of the "Boodini the Great" under Centaur ("imprint Chesler") and Archie (specifically Blue Ribbon Comics #1) to Eisner appears to be an error. All known instances of this feature, including the Blue Ribbon one and many Centaur/Chesler appearances, are by Fred Schwab. Additionally, Eisner never worked for Chesler.

Full legal name is "José Rafael Fonteriz". Most of his work is credited as "Rafa Fonteriz", but some others (like Nocturne (Marvel, 1995 series)) were credited as "Joe Fonteriz"

In American comics he often signs his work without accents (as they are not used in English) and sometimes merges both surnames (García and López) using a hyphen (Garcia-Lopez). He is not to be confused with Luis Garcia, who worked for the Warren magazines (as confirmed by Kevin Nowlan). 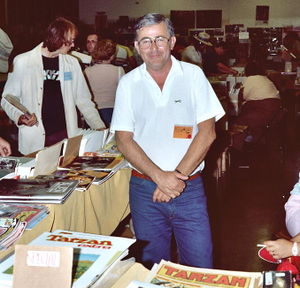